One of the oldest and easiest ways of smoking, the use of bongs has been traced back hundreds of years. A record in 1944 states that the name comes from the Thai and means “a bamboo water pipe for smoking hashish or hemp”. They’re synonymous with cannabis and weed culture, despite all the ‘Tobacco use Only’ stickers we’ve seen placed on such paraphernalia over the years. 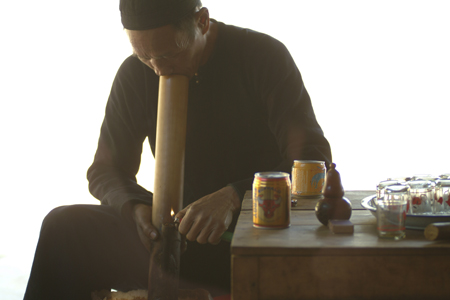 While they’re a stoner trope in movies and television, they appear as such for a reason: they’re incredibly functional. There aren’t many ways of smoking that simply involve grinding and lighting, and while it’s becoming easier and easier to get around not being able to roll a joint, most weed smokers will have some bong-reminiscent device close on hand as a backup.

How do bongs work?

The general idea behind a bong is that you’ve got a section that’s filled with water and two pipes. One pipe, which is referred to as the downstem, contains the cannabis and its other end is submerged within the water. 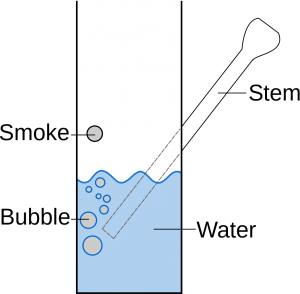 This mechanism of passing the smoke through the water achieves a number of things: Most popularly, it cools the smoke (hence you might see ice in some bongs) and as a result, compacts it, allowing you to draw in a larger hit than you usually would. Secondly, the water filters out any bits of plant matter or ash you might otherwise inhale or swallow.

Now, it’s hard to say if hitting bongs is healthier than smoking joints (because smoke is smoke, and it’s not great for your lungs), however, this mild filtration in addition to a lack of any paper being smoked makes it a possible healthier option. More research does need to be done though.

Now we’ve gone and gushed over the history of these bubbling pipes, let’s take a look at the different kinds to see what suits your needs best. 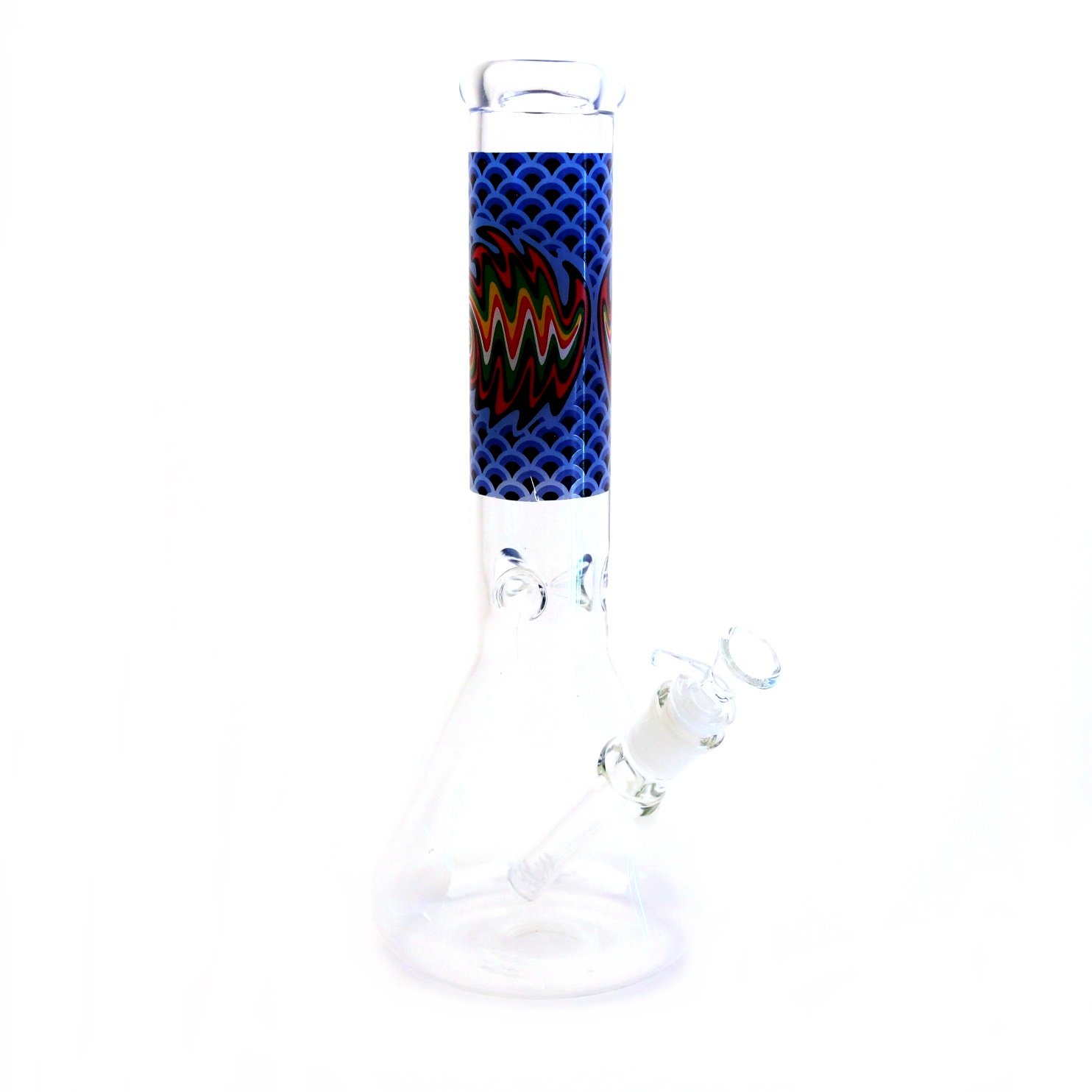 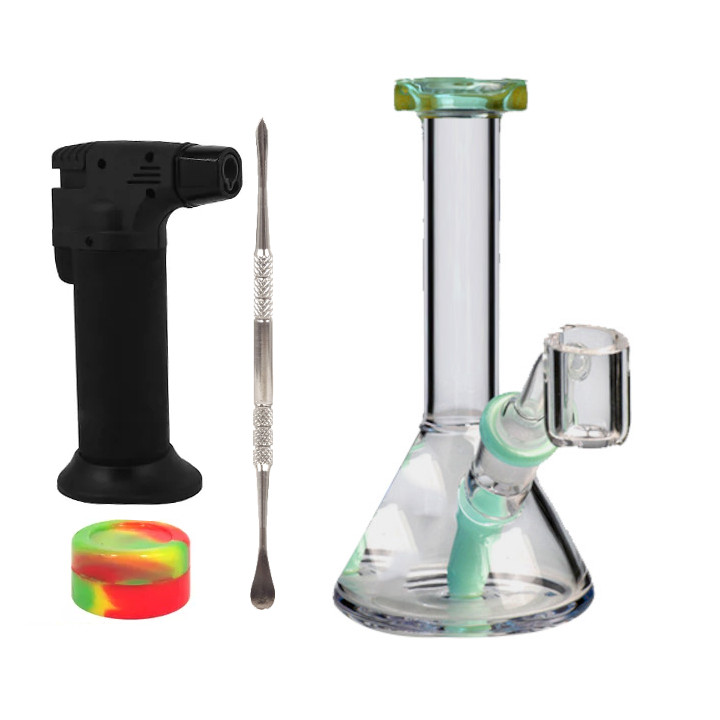 Bongs attempt to achieve two main things: firstly, delivering an easy-access potent hit of weed; and secondly making it easier to smoke cannabis than going through the whole ritual of rolling a joint.

Here are some of the more common types of bongs you’re likely to encounter in your weed escapades.

Glass bongs are the magnum opus of water pipes. Known for getting knocked over and cracked by that one friend we all have, they’re a great addition to your smoking kit for a number of reasons.

Firstly, a clear glass bong is a beautiful way to watch the smoke get created and swish around through the glass. A nicely cooled glass bong left in the fridge for a few minutes before smoking, or filled with ice water is an incredibly refreshing way to smoke on a hot day. They also come in all shapes and sizes from 3 m bong all the way down to a little pocket bubbler. 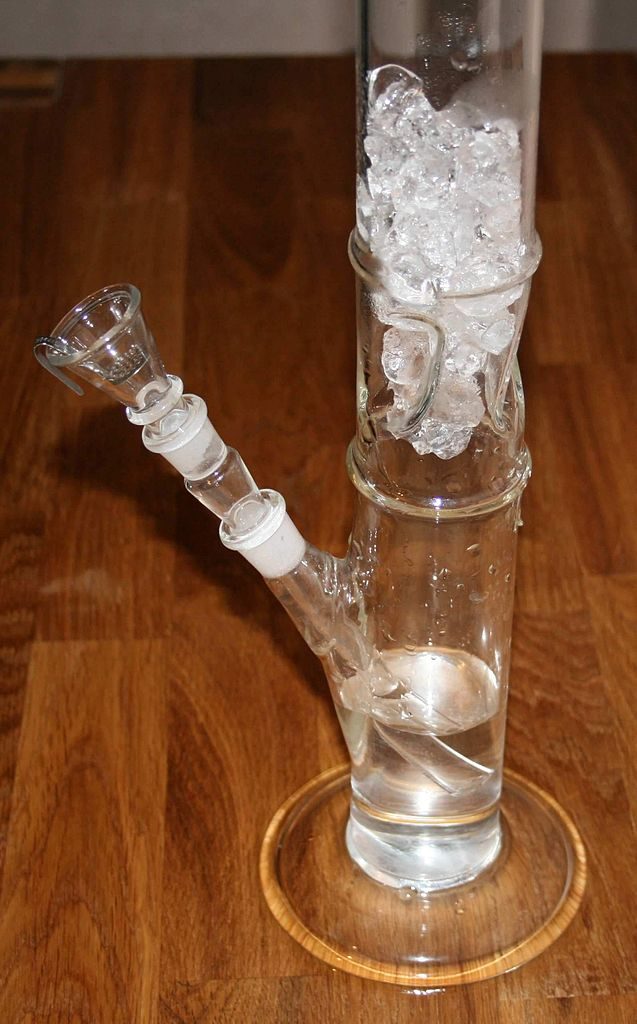 While they can be a little pricey, they’re a great mid-level bong and as far as we’re concerned, essential for any seasoned smoker.

Acrylic bongs are historically the symbol of the teenage stoner (Please note, we do not recommend that any minors partake in cannabis, it’s a substance meant for responsible adults only) and for good reason.

They’re cheap, come in funky colours and cheesy designs, often not that well-made (the downstems they come with are notorious for clogging) but get the job done at the end of the day. Unfortunately, heating plastic-based materials is never a good idea, thus we maintain acrylic bongs are best left avoided as much as possible.

They are, however, a nicer option if you’re prone to knocking the glass ones over, or looking for something you can travel with that won’t break.

Ceramic Bongs can be seen as a classy step up from glass, while still not quite being the designer bongs we’re going to take a look at further on in this article.

They’re a little more durable than glass and easier to repair if they crack in two – but most importantly, the pottery build of these kinds of bongs allows for great creativity with design, whether it’s the shape and appearance, or a graphic painted on the piece.

Ceramic bongs are great for the connoisseur, or anyone who wants to show off a little with a bong that might even attract the attention of say, your elderly aunt – instead of a bong that you have to hide out in the shed when your relatives come to visit. 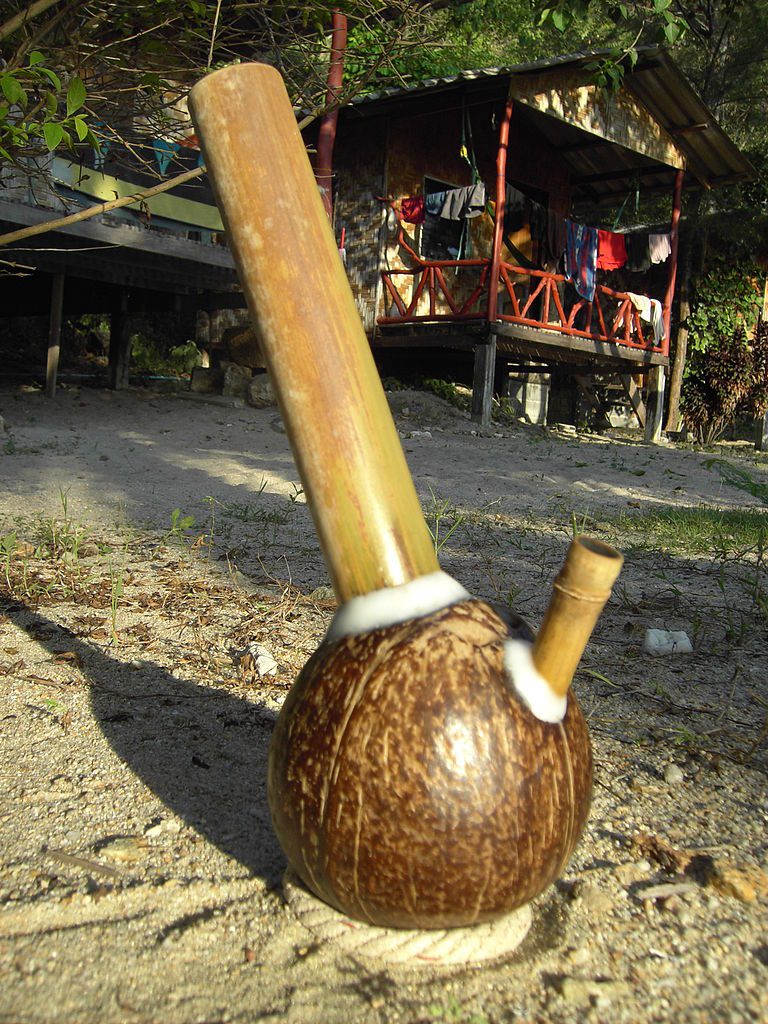 You could, arguably, make a beautiful artisanal bamboo water pipe that uses no adhesive or any material except for bamboo, but this isn’t really common at all. What’s a lot more common (and a lot more dangerous), is a plastic bottle with a hosepipe or pen used as the downstem.

These are, obviously, best avoided, and if you’re looking to make a safe bong at home, there are plenty of guides and tutorials online to help you make a safe and quality homemade bong. Remember, heating plastic creates toxic chemical byproducts that you don’t want anywhere near your mouth and lungs. 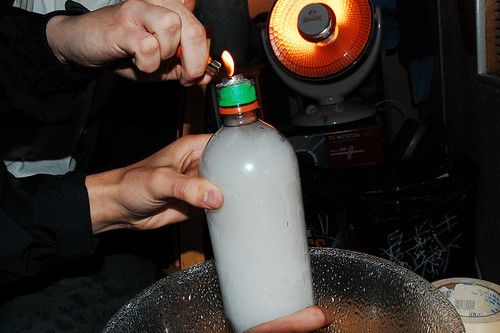 A gravity bong is somewhat more of a novelty bong, and usually, they’re used with the intent of getting very, very high.

They’re made by taking a large bottle filled with water (2l or more) with a downstem placed in the bottle cap, and a plugged hole in the bottom of the bottle. With a flame above the weed at the ready, you remove the plug (usually your thumb) allowing the water to pour or. This creates suction within the bottle, which draws air in through the downstem and fills the bottle with smoke.

You can then either take a rip from the bottle cap like you would a bong or sip it slowly more like a joint. These are fun to make, one use items for parties or big smoke sessions where you might be feeling like a bit of simple, silly fun.

Apple bongs (or potato/carrot pipes) are best used when in a pickle. If you’re traveling somewhere unfamiliar, or are stuck without anything to smoke from, these make for a great emergency option.

Simply stick a pencil about halfway down the apple from the top creating a downstem, and twice again from either side, at an angle, making a mouthpiece and clutch. Place some foil or mesh over the bowl and smoke away.

These don’t taste great but are a nifty last resort.

In recent years, with cannabis slowly becoming more and more legally available, there are a number of alternative ways to smoke cannabis that are becoming more popular. For example, dabbing and vaping are heavily on the rise, if not widely accepted as common ways to smoke, as well as various tinctures and extracts.

Let’s take a look at some smoking devices for the high-end consumer, who likes their boutique products and a little bit of flair. 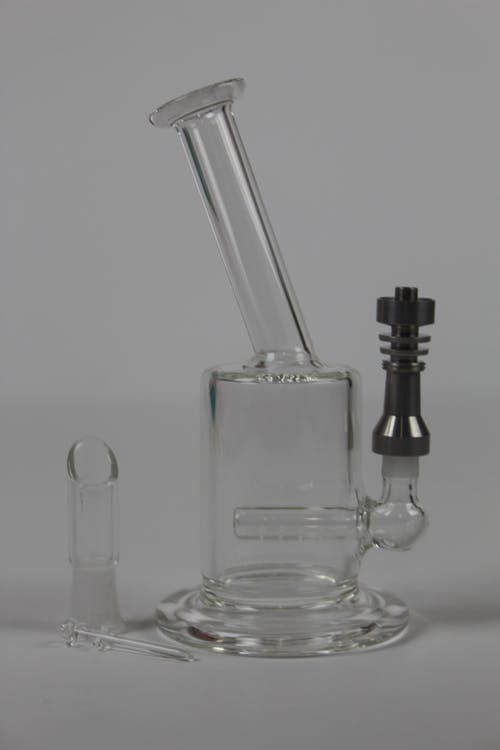 Dabbing is a form of smoking concentrated cannabis extracts, usually made via extraction with a solvent like butane or CO2. Also referred to as wax, shatter, budder or crumble, these extracts are varying shades of brown, honey and yellow, each with their own extraction and refining process and benefits therein.

Dabs are commonly smoked in dab bongs or dab rings, which use a heated nail to combust the extract, and a metal rod to place it on the nail. While dab rigs are usually heated with a blow torch or similar device, it’s becoming more common to find rigs with electronically heated nails which you can adjust the temperature of and safely use without worry of blowtorching anything nearby. You can also find dab rig attachments that fit in place of the downstem in regular bongs, allowing you to switch back and forth.

They’re called dabs because of the amount of extract you place on the nail (“a little dab will do you!”) however these minuscule globs of resin produce rather huge clouds of smoke. It’s extremely common for the first time dabber to enter a 10-30 minute coughing fit upon their first try.

Dabs are a great way to consume cannabis in high doses if the extracts are readily available to you, however, it’s imperative that the producer of such extracts knows what they’re doing so you don’t end up with any solvent residue in your dab. They’re also not for everyone, so consider trying before you buy. 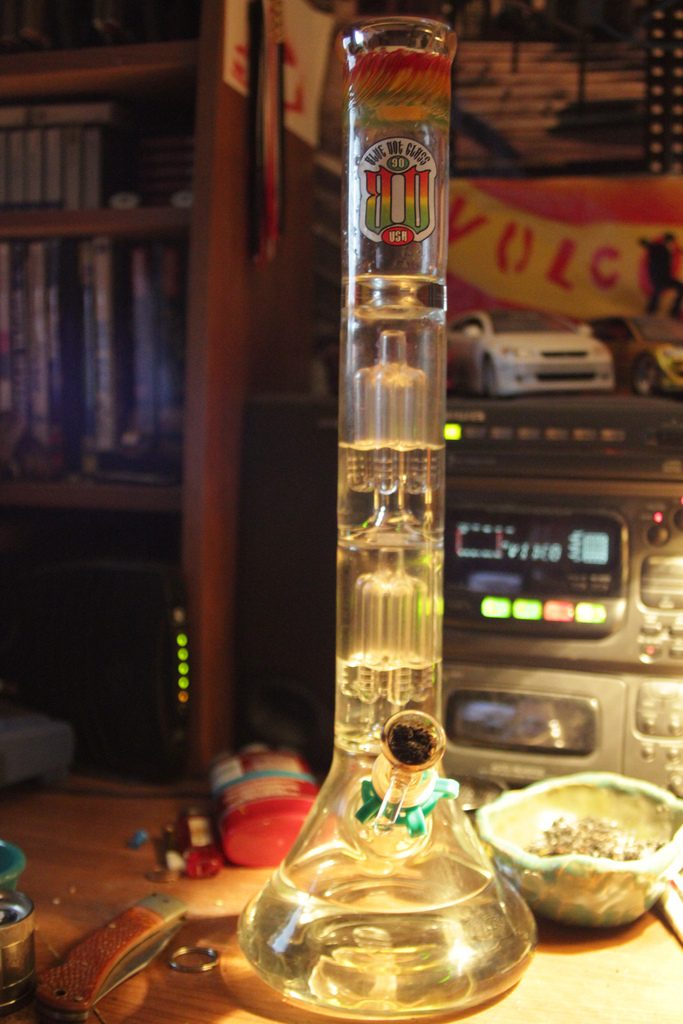 Percolators are a feature common in many higher-end glass bongs. They’re a series of tiny holes in a later or tube of glass, often found in a secondary or tertiary chamber in the bong. Similar to a coffee percolator, they diffuse and filter the smoke further than a one-chamber, no-perc bong would.

This results in a much smoother and cleaner smoke and allows the smoke to be cooled a lot quicker within the same amount of space. If you’re a fan of the glass bong and don’t have one with a percolator, it’s an addition you certainly won’t regret.

Whether a honeycomb, tree or turbine style, there’s a percolator bong waiting somewhere out there for you.

A post shared by The Great Northern Collective (@thegreatnortherncollective) on Dec 26, 2017 at 7:36pm PST

If you’re someone who vapes weed, a vape bong or vape attachment is a great way to make your smoking that little bit healthier. Since vaping a professionally made extract in a clean device is one of the least harmful ways of smoking, adding water to the equation is a great way to take things to the next level if you’re worried about the effect weed smoke will have on your lungs.

With some bongs, a simple pipe from bowl to vape is enough to make it work, however, others will require a more complex set of modifications, so you might have to shop around a little bit. A lot like dab rig attachments, these are nifty as you can choose how you’d prefer to smoke, not having to limit yourself to one route of administration.

It seems that with the idea of smoking cannabis medicinally becoming more accepted and colloquial, vapes will likely be a big player in the way weed is consumed in the years ahead.

There are so many aspects to bongs and bong culture that it can be hard to make head-or-tail of. Some smokers will only ever use one device and refuse to use any other, whereas others will have one of each and use them all multiple times a day.

It’s all down to your personal preference, and functionality in the end – and of course the quality of your bud. After all, what’s the use of smoking majat out of a R4000, electrically cooled, percolated glass bong? We’ll leave it up to you to decide.